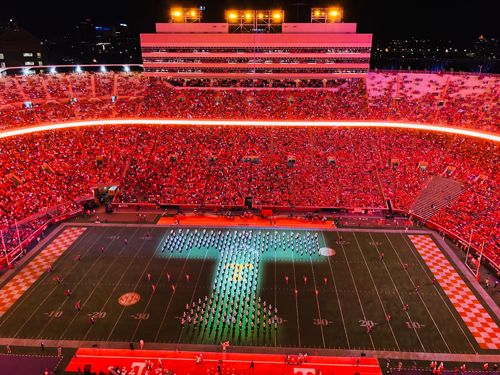 Bandit Lites provided Elation Proteus Maximus, two wireless solution black box for wireless DMX for fixtures across the stadium and a Chauvet provided Chamsys Magic Q MQ500. Bandit controlled included the existing Musco sports lighters and RGBA wash fixtures as well as the ribbon board in the stadium. The newly installed letters V O L S were also under Bandit control. Alex was in total control of all illumination.

“I utilized the framing shutters on the Proteus Maximus to create the Power “T” at the top of the show and to highlight the VOLS spell out at the end of the halftime show,” said Becker, who shared the Elation Proteus Maximus fixtures were chosen for their high output and IP65 Rating.

The University of Tennessee wanted to take the game’s lighting to the next level with the band directors calling on Bandit to incorporate a light show into the half time show.

“VOL nation is already the largest, loudest and most energetic stadium in the country and were enhancing it even more by adding a better fan experience with light shows,” finished Becker. “I believe lighting keeps the fans engaged throughout the whole game, and I believe we are doing something that no other school is doing. Yes, almost every stadium has the field lights that chase, but I don’t think anyone is doing programmed light shows prior to kick off or during halftime.”

The lighting continued into the night as the fixtures were also used to light the crowd during the game, the field during timeouts, the moments following PAT’s and other performances/chants during the game (such as the iconic Tennessee “Rocky Top” song.)

“Being a Tennessee graduate and an active part of many boards and organizations it is the right thing to do to take this environment to the next level,” says Bandit Chair Michael T. Strickland. “When Athletic Director Danny White and head football coach Josh Heupel first came to town, they reached out to me. They realized the power of an amazing light show in the college football environment. The biggest win here is the affect it has on the recruits. As every university struggles to outdo one another, The Tennessee Volunteers are on top with the only light show in the nation. Yes, other stadiums flash their stadium lights, but Bandit and the Vols take it to 11!”.

Fans can expect something different every night game, with Bandit’s team illuminating the evening pregame and halftime shows. Bandit Lites will continue to light up and cheer on the Tennessee Volunteers!