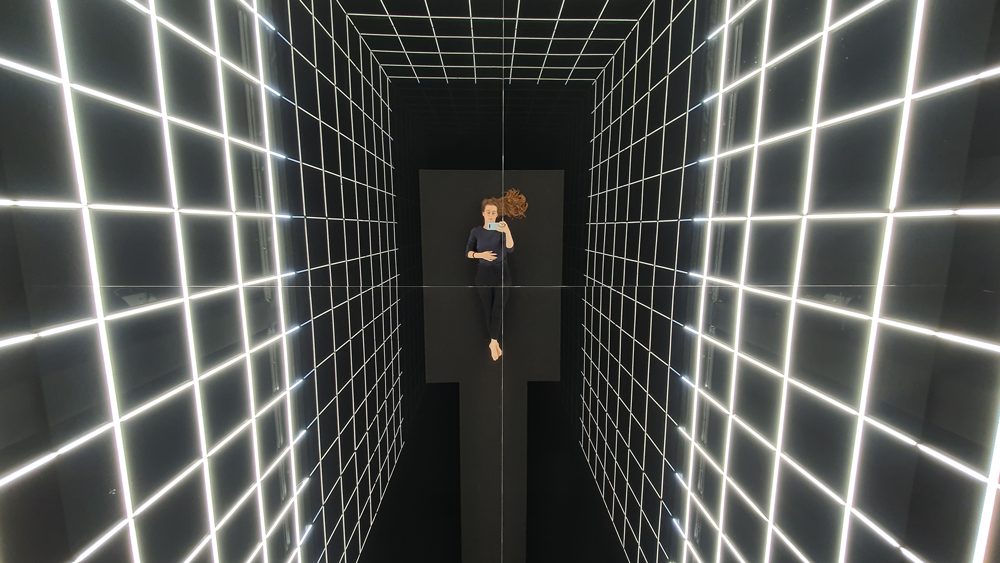 A former Georgian residence in Marylebone will be transformed into a temple of light this November with an exhibition featuring the work of five women light artists from the UK and Europe. Curated by British ‘light activists’ Light Collective, the ‘Collected Light’ exhibition will be housed in the atmospheric SoShiro gallery Marylebone, London where each artwork will have its own dedicated room for visitors to immerse themselves. Neon, LED and film projections are some of the artistic tools used by the following five artists:

In Lucem, 2019 by Tamar Frank (The Netherlands): A series of 20 small light panels illustrate – 4 of which are on display at this exhibition- a seemingly still image with a central focus that gradually blends into different colour compositions. The colour gradients are inspired by the changes in natural light over the course of one day and change very slowly so that the transition itself is not perceived. The artwork is a response to the perception of light as a natural presence. The central focus invites the spectator to slow down and allow the light to draw the viewer in. The diffusion of the image does not allow the eye to focus. As a result, the image will appear to pulsate and float.

Peacock, 2020 by Chila Singh Burman (UK): Burman is celebrated for her radical feminist practice which examines representation, gender and cultural identity. Peacock was part of the hugely popular neon installation on the exterior of the Tate Britain ‘Remembering A Brave New World’ in 2020.  She explains “my Peacock piece explores the birds’ symbolism of re-growth, rejuvenation, beauty and love. The peacock is native to the Indian subcontinent, in this way it is also a reference to my Indian heritage.” Burman works across a wide range of mediums including printmaking, drawing, painting, installation and film. 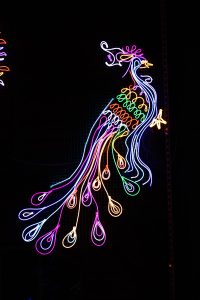 Halo, 2019 by Karolina Halatek (Poland): The circular-shaped immersive installation is designed to draw out a very personal experience. Visitors interacting with the work have the possibility of discovering a new dimension of their own presence in the contemplative, pure and abstract environment. The title ‘Halo’ refers to the natural optical phenomena seen around the sun or moon, produced by light in the interaction of ice crystals. The place of the celestial body is given to the art viewer, who becomes a central part of the piece. Halatek is a Polish artist who uses light as a catalyst for experience.  She often collaborates with non-artists including quantum physicists, founders of the superstring theory (Leonard Susskind, Roger Penrose, Carlo Rovelli) and precision mechanical engineers.

The Lost Girl, 2020 by Kate McMillan (UK/Australia): The Lost Girl is an immersive film-based installation centred around the fictional character of a cave-dwelling girl on the east coast of England. Using DH Lawrence’s book of the same name as a starting point, the film narrates the experiences of a young woman seemingly alone in a dystopian future, with only the debris washed up from the ocean to form meaning and language. The film combines McMillan’s various research interests including the Anthropocene; the role of creativity in forming memory and the consequences of neglecting female histories. McMillan is based in London and is the author of the annual report ‘Representation of Female Artists in Britain’ commissioned by the Freelands Foundation.

Off Grid Series 2022 by Jacqueline Hen (Germany): This installation investigates the perception of the body in space in the face of the digital realm. How is social media influencing our perception and interaction with the physical space? Mirrors and an arrangement of lights create the illusion of an infinite space of luminosity and darkness. The perception of this space changes with the viewer’s perspective inviting them to investigate their self within infinity.

The concept of the exhibition came about from Sharon Stammers and Martin Lupton of Light Collective and is an extension of their upcoming book of the same name as the exhibition, featuring over forty female light artists. Stammers explains “After 25 plus years in the world of light, it became apparent, that there is huge visibility of male artists who work with or have worked with light within their body of work. Our hope is that by profiling these women artists in the book and exhibition, we are opening a door for other women interested in using light as art.”

This exhibition is the debut of a permanent collection made up solely of women light artists. After exhibiting at SoShiro, the exhibition will move to Milan with the addition of several more artists and be shown during Euroluce.

In 2019, Light Collective launched the global project, Women in Lighting, creating a huge community of women around the world working with light within architecture, art and other sectors. Light Collective is a UK based lighting consultancy that has worked all over the world with a huge portfolio of projects that include film making, art, events, community events, light activism, architectural design and education. The Collected Light exhibition and the Women in Lighting platform is supported by forma lighting, a family-owned Italian lighting designer and manufacturer dedicated to architectural lighting. SoShiro’s space is lit using formalighting products and the Pixo Retro range of decorative light fittings, also from formalighting, will be on sale from the gallery during the run of the exhibition.