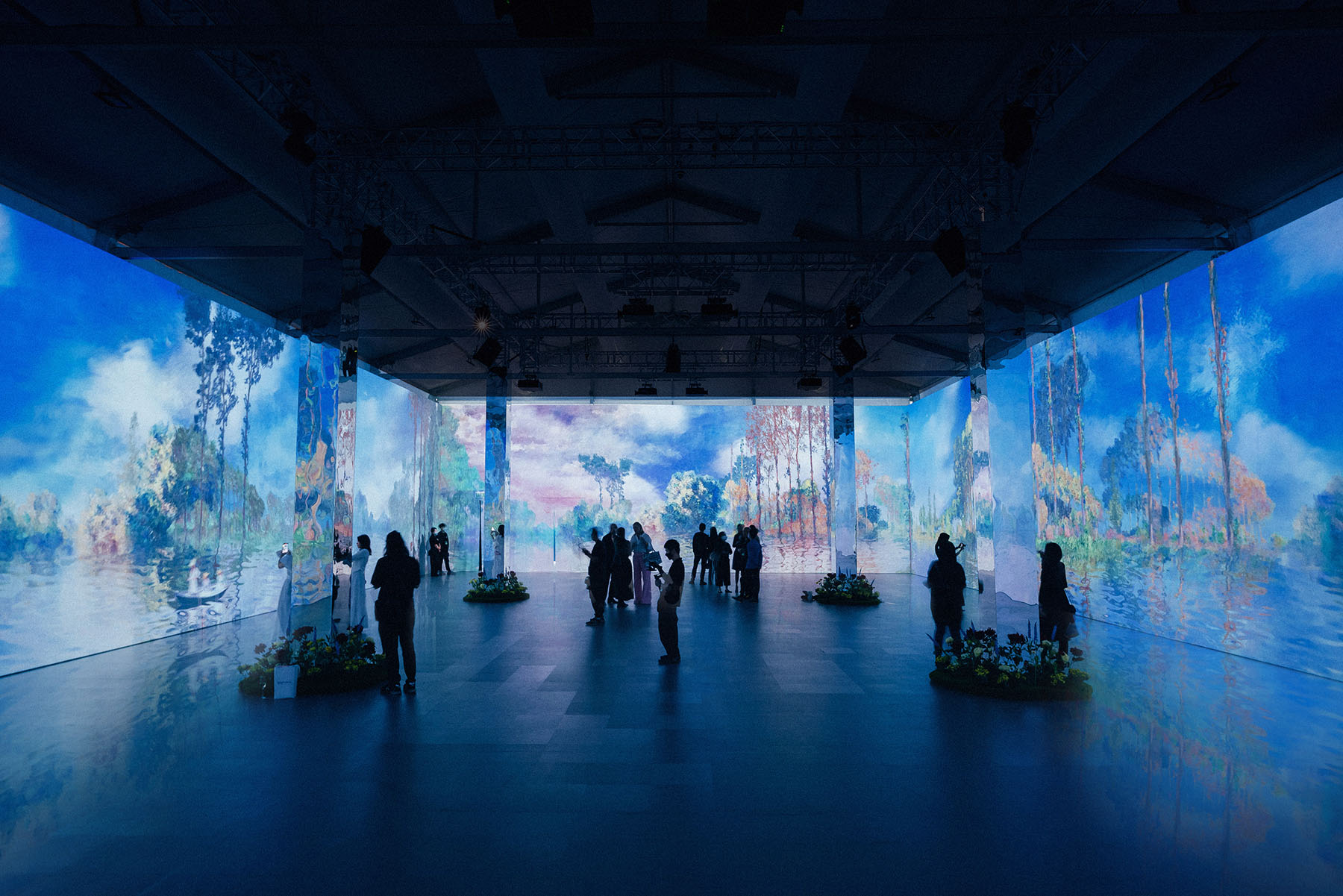 The work and creativity of one of the best known and most significant impressionist painters, Claude Monet, will attract all elements of art lovers in a radical new gallery concept presented in a special temporary venue erected at Hong Kong’s Xiqu Centre in the West Kowloon District.

This is thanks to some genius imagineering and teamwork between international video mapping, immersive experience and digital art creative studio, Dirty Monitor, and ChillHoYeah Hong Kong, a new company with a passion for art, technology, and experimentalism.

This unique collaboration was commissioned by exhibition organisers ChillHoYeah, a co-promoter with Dirty Monitor for “En Voyage with Claude Monet” which will run for three months at this site.

This is the first full scale project by D-Mines, Dirty Monitor’s brand-new creative content production management division headed up by Benjamin Bauwens, who has previously worked at ArKaos and as a video specialist for rental giants PRG. He enthused, “This is a hugely exciting idea set to revolutionise the way art can be appreciated – not just by traditional art lovers, but by new, different and diverse audiences who may not necessarily ever think of visiting a traditional art gallery.”

En Voyage with Claude Monet takes elements from 200 of the painter’s ephemeral and multi-layered masterworks. Many were painted during his extensive travels around France, Italy, the Netherlands, the UK and more. Others included a selection painted in his famous garden in Giverny which was replete with perspectives, textures and colours and an amazing water lily pond.

These elements are digitally blended into one large 360-degree digital canvas in a projected show that runs for 36 minutes. It is accompanied by a specially composed soundtrack commissioned by Dirty Monitor and composed, produced and performed by the renowned Echo Collective.

The show narrative is guided by a voice-over that follows trails and thoughts running through Monet’s letters and an interview he did whilst travelling, revealing inspirations gathered on these various trips.

It delves into his constantly changing mindsets and moods during these journeys, explaining some of his feelings and emotions relating to everyday life, thoughts, experiences and interactions with his wife, his home and garden and nature-based elements like the water lilies in particular.

The public stands in the middle of the gallery space and absorbs the sonic and visual moods – snapshots of ambience that can trigger any number of slightly abstract but relatable moments from Monet’s life. Insights that can be interpreted in multiple ways according to the person engaging with the artwork as the audience becomes absorbed as part of his travels, sharing in his quest for colours, light and water reflections.

Dirty Monitor’s creative lead for En Voyage with Claude Monet, Audrey Ballez, explains, “Monet’s life was full of ups and downs with an identity quest and a need for recognition of his art, but also marriage, birth, death and remarriage … So his life is a mine of interesting material to explore in terms of putting emotion at the heart of the immersive show!”

The screen measures 5.7 metres high and is 94 metres in length, arranged in a large rectangular format. The screen material is a special SB Blackout PVC sourced after much research and trialling from fabric specialist Showtex. It is stretched taught across custom frames also supplied by Showtex.

These are all rigged on a central truss in the roof of the venue for optimal positioning.

The projectors were chosen for their brightness and the special Smooth Pixel Drive – ‘pixel wobbling’ – technology that, combined with the Ultra HD signal playback, creates highly detailed images which are beyond the projector’s panel resolution.

This feature makes them the perfect hardware for applications like this with 4K sources demanding exceptionally precise and detailed on-screen reproduction.

However, the real magic is all in the content.

Firstly, the creative team made a storyboard retracing Monet’s early life starting at 15 years old, using paintings which are very representative of his studies and also of his bad patches and the polar opposites to his moments of success. 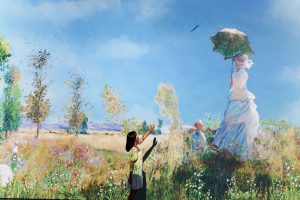 When selecting the works, they were guided by his ‘voyage’ hence the title “En Voyage with Claude Monet”.

A canvas of paintings was produced based on these works, then animated with great finesse, taking care to mimic Monet’s own research and understanding of the behaviour of light and movement and maintain the integrity and magic of his works.

The Dirty Monitor team put the task of respecting and conveying what he spent his whole life studying – light, movements, mists, the atmosphere in each picture, the seasons, the changes during the day and the year – at the heart of this bold new interpretation, and it is the Monet-esque treatment of elements like skies, seas and water, smoke, etc. that makes this show unique.

Technically, the goal was to create an immersive mapped show that delicately merged the paintings into a single landscape that you might discover if standing next to Claude Monet!

For supporting projections across the entire gallery floor, six of Robe’s ProMotion digital moving head effects and video projectors were picked to content and images around the space, which is a first for an immersive installation like this. The ProMotion’s internal media server is utilised to store and play back this bespoke material resulting in a neat and streamlined and self-contained solution, explained Ben.

Before entering the main projection area, people pass through an Info Room where they can read printed scene-setting facts about Monet and his travels, and at the end, there is another area where guests can take an intense 10-minute VR trip with the artist, which uses separate but related content also created by Dirty Monitor.

The main technical challenge was in rendering the images in the very highest quality detail required to bring the large-scale projections alive.

However, the most galvanising creative task was most definitely being trusted with the responsibility of representing the leader of the Impressionists and one of the most famous artists of all time.

Audrey notes, “Throughout Monet’s life and travels, he was accompanied by his loved ones, so wives, family and friends are all part of his work and this was the foundation for our main narrative theme for this immersive show.

“Visually, the setting is limitless. It is like facing the panoramic view that Monet himself saw while painting those landscapes!

“We decided to implement a voiceover based on Monet’s letters, so when visitors experience this show, they are in Claude Monet’s life. It is like standing next to him while he’s painting and talking to you about his life so the individual will become his accomplice in life!

“The hope is that, after visiting the immersive experience, people will want to know more about this amazing painter and character.”

The show is about bringing emotions and aura to a cinematic proportioned but very personal story which can be interpreted in numerous different ways. Around six months of intense evolution involved the work of 15 highly talented visual artists all co-ordinated to enable impressive results to thrill and amaze the crowds.

Hong Kong is the world premiere of this ground-breaking idea, after which En Voyage with Claude Monet will move on to other destinations in Southeast Asia, the US and around the world.

Stay tuned to be the first to know about D-Mines’ special upcoming worldwide projects in 2023. We can already disclose this will be all about presenting an amazing mix of new hybrid art forms, experimentation with cutting edge technologies and appealing topics, including some geared toward families!