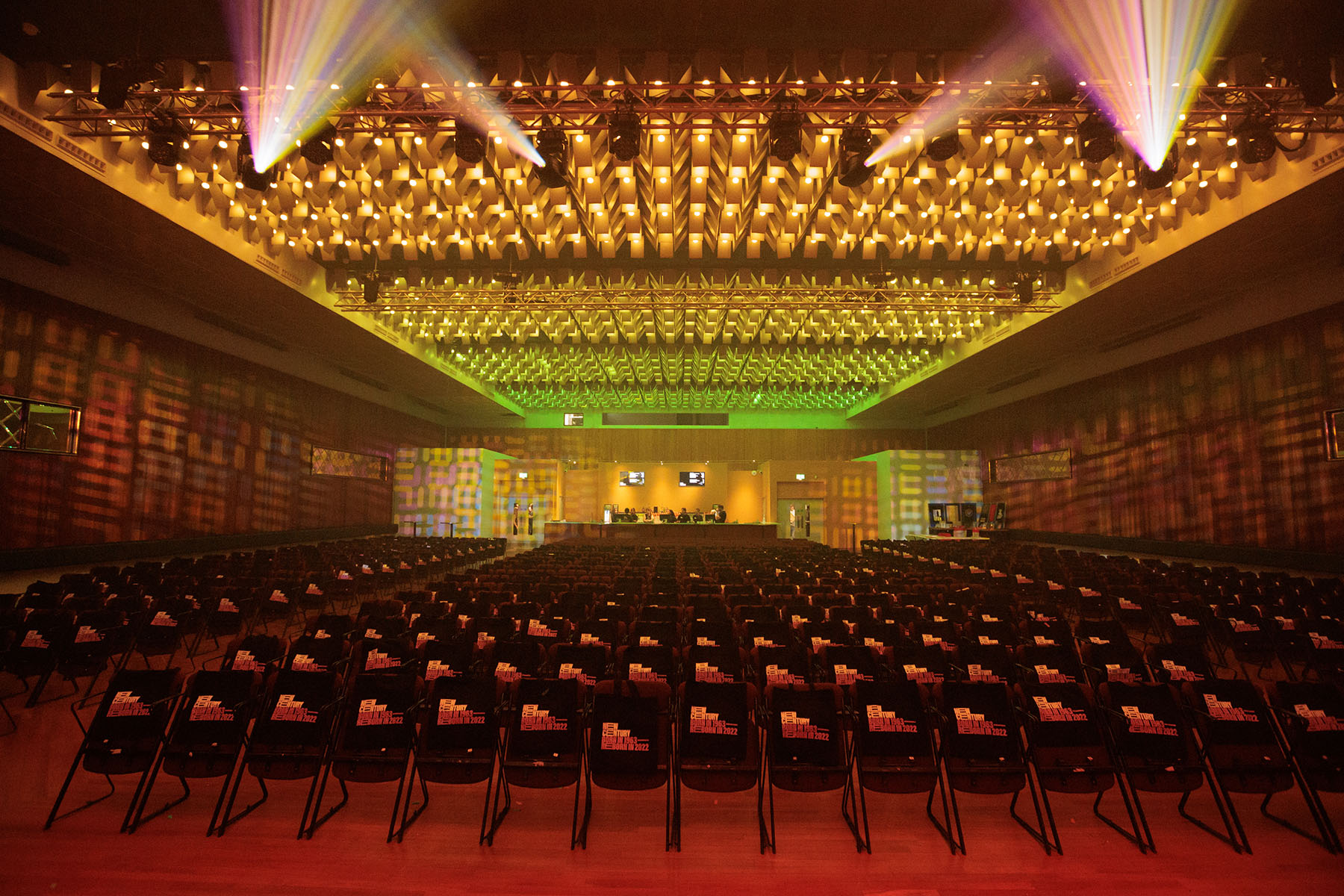 The building has been completely refurbished and restored to its original 1960s glory when numerous music legends of the day graced the stage.

Neil worked closely with Abby Moore, one of the venue’s directors, to establish what was needed in terms of stage lighting production, and then weighed up the options to bring as much “flexibility and value as possible to this fantastic space.”

The venue can be standing or seated (800 cap) and already has a lively, all-action schedule including many music concerts programmed by Manchester-based promoter Now Wave, as well as staging a diverse line up of other events from boxing to corporates.

Seeking a “truly adaptable, rider-friendly and bang up-to-date” lighting solution, Neil, who uses a lot of Robe in his various projects, immediately thought of Robe’s new PAINTE which has just been launched and arrived on the market at a perfect time.

He then added eight of the new and already hugely popular LEDBeam 350 to the list, which he knew would be ideal as a front wash. Its very useful 3.8-to-60-degree zoom proved a complete winner to cover the 15-metre-wide stage and the small size enabled optimisation of the 5-metre headroom.

“These two fixtures ticked all the boxes,” stated Neil, adding, “PAINTE is very contemporary, small, punchy, super-fast, it creates nice beams, has a good range of gobos, accurate framing shutters and iris control plus a great zoom,” he enthused. The PAINTE’s light weight was another advantage that “maximised any spare load capacity in the system, also allowing greater latitude for what incoming shows can ultimately achieve with their lighting.”

The PAINTE and the LEDBeams can do all the subtle work that might be needed for a spoken word performance or a jazz show as well as all the attitude needed for rock ‘n roll and all genres of music.

Neil also noted that “Robe is on most international rider specifications now, and even if it might not be, almost every LD and lighting director is happy to work with the brand.”

The dancefloor is around 25 square metres and the LEDBeams on the front truss can also be used to illuminate this when needed.

For additional tight beam effects and to contrast with the PAINTES, 14 of Robe’s little LEDBeam 150s were added, rigged on the three over-stage trusses.

“A great compliment to the other Robe fixtures and outstandingly priced,” said Neil elucidating that because they also go from a tiny beam to a wide wash and have strobe and pulse effects, they are “truly multifunctional” and a great asset to a venue like this.

There are also some conventional strobes and LED blinders in the rig, all controlled by an Avolites Tiger Touch II Pro console. Visiting productions / tours can also bring in their own consoles and floor packages and hook into the house ‘top’ lighting system.

New Century’s resident lighting designer is Emma Towers, who has worked at several venues around Manchester including Victoria Warehouse, Mayfield Depot and Manchester Academy, and lights any shows and events at New Century that don’t have their own LD, as well as generally overseeing all things lighting!

She comments that working with the PAINTES is “effortless” and that the colour mixing and colour filters are “incredible”. She also notes that several photographers and videographers have already commented that it is easy to film shows without lamp flickering thanks to Robe’s C-Pulse feature on the PAINTES and LEDBeam 350s.

She also appreciates the gobo range and the resulting beam effects as well as the lumen output which she reckons is “impressive” for an LED fixture.

Production manager Mish Thompson also approved the lighting budget and was impressed by Neil’s specification, “It looked like a great choice of fixtures to cover the wide variety of shows we are staging here” she said, observing that the stage lighting also works brilliantly in conjunction with the venue’s bespoke LED ceiling feature lighting installation which covers much of the auditorium roof with full colour changing.

Theresa Gibson, Robe UK’s head of marketing added, “New Century is the most awesome venue and a very special home for both the first UK installation and the first globally of this powerful and punchy fixture!

“Having staged some massive names in music history, from the moment you walk through the doors the building radiates special vibes and still retains its original charm and many features.

“Reborn with a Robe lighting rig that will support a range of artists and events, New Century is sure to once again become an iconic Manchester hotspot!”

Originally built in 1963 for the Co-Operative Insurance Society, the now heritage listed venue has seen some truly iconic musicians – Jimi Hendrix, Pink Floyd, The Rolling Stones, The Kinks, Tina Turner and many more – strut the stage. At the end of the 20th century, it became a charismatic space for ‘MADchester’ era rave parties at the heady start of that movement.

After laying derelict for several years, great energies and creativity are once again emanating from New Century with the refurbishment that included reinstatement of the original sprung dance floor; the new light artwork in the ceiling and the installation of high-quality and value production lighting and audio systems to facilitate the touring circuit as well as a plethora of one-off shows.

The transformation of the building is part of the ongoing development of Manchester’s pulsating NOMA area. The three storey New Century basement will house the Access Creative College, while the ground floor is already thriving with a bar and kitchen offering a delicious selection of alternative street foods.

The New Century performance space was officially reopened on 20th September 2022 with a show by ‘punk poet’ John Cooper Clarke.