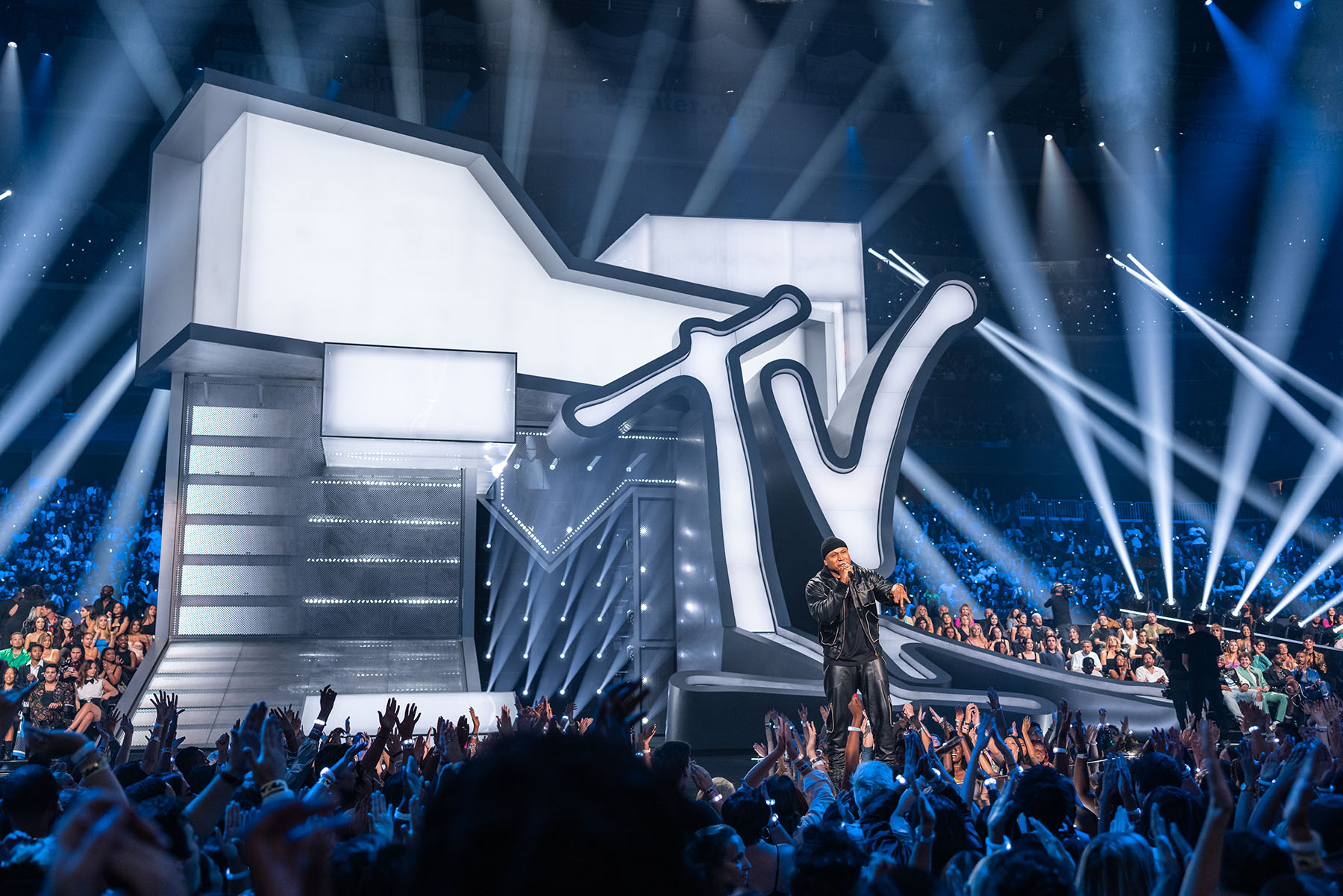 The much-anticipated 2022 MTV VMAs (Video Music Awards) proved every bit as thrilling, visually dramatic and sonically entertaining as music fans globally have come to expect of this high-profile live broadcast extravaganza! This year it was staged at the Prudential Center in Newark, New York, and lit for the third year by Tom Sutherland of DX7 Design.

In the middle of one long side was the ‘MTV Entrance’ a large scenic graphic of the channel’s famous acronym, where artists entered the arena, stepping onto the chevron-shaped MTV Stage. A short tunnel at the back of the entrance revealed another LED screen, and the short runway also had an LED floor and sides. Much of the presenter action happened in this zone which was a popular celebrity ‘hot spot’.

While that was a lot of LED for Tom to consider, he was the first to note that “working with Heather is great as she always considers the role of lighting relative to her set design.” The two had also worked together on some previous projects in Asia, so there was a fluid and constrictive creative synergy. 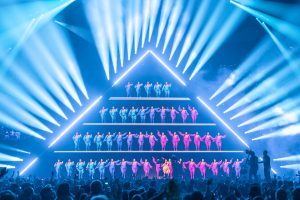 The geography and layout of the two stages facilitated the full-tilt festival style ‘flip-flop’ of live artist performances that kept the pace and the vitality of the show pumping.

Tom positioned 76 of his MegaPointes, 38 per screen, around the triangular LED screen perimeters on each stage, with eight more a side on two deck-based diagonal raised ‘slip’ positions at the back of the artist / VIP area, either side of the MTV entrance.

“MegaPointes were an easy choice,” stated Tom, “I needed something with plenty of power, definition and variety to cut through everything and enhance the geometry of the room, so MegaPointe was my go-to!”

Thousands of variant MegaPointe looks and mountains of dancing and piercing beam looks were crafted with some quick and super-smart programming to support the different artists’ performance narratives!

The lower sections of the two screens’ trussing framework were removable to allow rolling risers and other stage trucks loaded with kit, scenic elements or backline to load on and off the stage smoothly.

The main overhead roof truss structures were also designed largely on a triangular theme to keep the symmetry intact and to achieve the best lighting positioning. Dotted around this vast airspace were 85 x Robe BMFL WashBeams.

Power and precision were again the main reasons for picking and deploying these. BMFL has been a favorite fixture of Tom’s for some time, and he continues to use them as a backbone for large scale spectacular shows like this.

They were needed to cut through the brightness of the screens, helping eliminate shadows for the 22 camera positions as well as making up the base presenter and house lighting looks that defined the overall architecture and aesthetics … all from their 50ft trim height!

Thirty-six Robe Spiiders were utilised in the tunnel behind the MTV stage and in its entranceway and for back lighting presenters on the chevron stage, and there were four Robe ESPRITES in the floor specials packages available on each stage.

The fixtures were dotted all over the trussing network in the roof and offered the flexibility and punch needed to ensure everyone could always be lit optimally.

Tom commented on how much easier and more efficient this operation is, especially in a constantly moving multi-camera environment, due to this proven and reliable technology from Robe.

“Being able to get all the different angles and change fixtures mid show, effectively getting a light into any position it is needed … has been a game changer in the world of follow spotting,” declared Tom, adding that it brings the possibility of “lighting large television and broadcast shows like this with so much more precision and theatricality – it is amazing!”

The RoboSpot base stations were all located on one of the venue concourses ensconced behind the big ‘M’ of the MTV entrance scenic piece. The operators had control of pan, tilt, iris, and dimmer, with all other parameters running through the main lighting console.

As always Tom worked alongside his own very talented team from DX7 Design to make this look awesome! Joe Holdman and Brian Jenkins were the man console operators, Joe taking care of the FX lighting including all the moving lights and all the LED pixels on the rig, and Brian ensuring that all the key lighting was in place and co-ordinating the RoboSpot system.

They were joined by senior associate designer and lighting director Hunter Selby, lighting directors James Colidcott and Jasmine Lesane; lighting programmer Stefan Zubocic – who dealt with around 100,000 PixMob LED wristbands on site; and lighting intern Noah Bresler. The gaffer was Alen Sisul and the lighting techs were Dennis Sisul and John Cox, with media programmed by Kirk Miller.

All technical production had to be installed, tech’d, co-ordinateld and programmed on site in two and a half weeks, making time the biggest challenge, especially given the show’s reputation for production excellence and everyone’s high expectations.

“As always it was the teamwork, professionalism and the camaraderie that made it rock, not just from us in technical production, but those from every production aspect and all on the artists’ side, which made it so special, and such a slick operation that we were all proud to deliver,” concluded Tom.

A star-studded collection of visual winners on the night included Taylor Swift picking up the Best Video Award for her song “All Too Well” (Taylor’s Version); some exclusive live collaborations included Jack Harlow and Fergie; while Lizzo got eyes popping with her brilliantly choreographed interactive video and lighting performance for “To Be Loved” (Am I Ready) and “About Damn Time”.