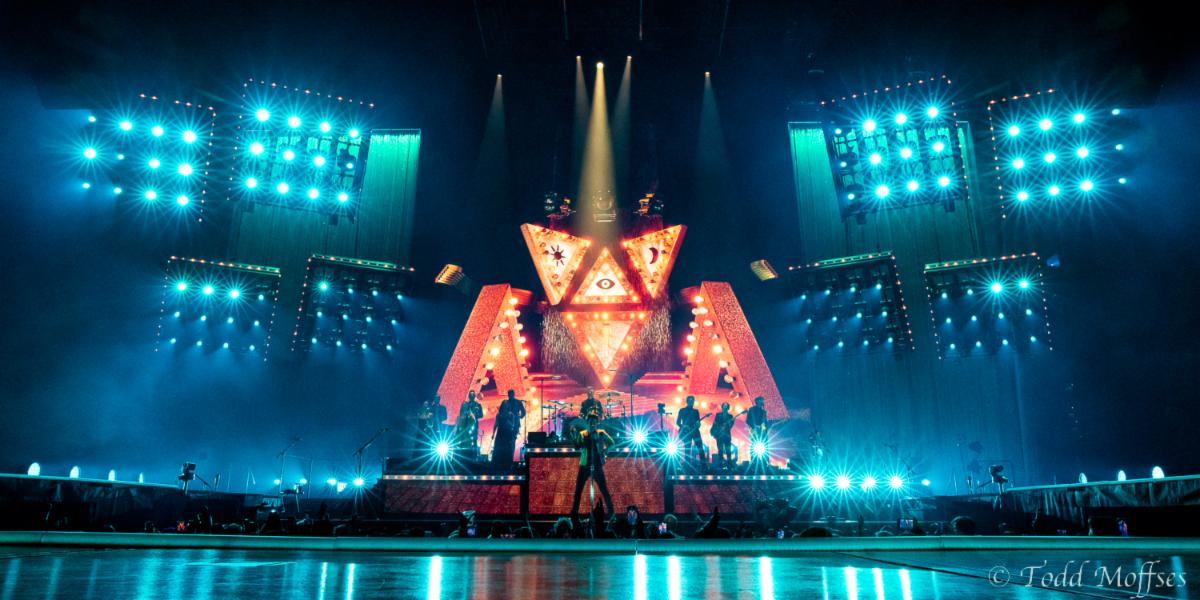 US rockers Panic! at the Disco kickstarted their highly anticipated Viva Las Vengeance arena tour at Austin’s Moody Center in September, with a 70s and 80s rock-influenced high-octane show. Conjuring up rich colors and sharp beams were 128 VL2600 PROFILE luminaires from Vari-Lite, the originator of the modern moving head and a Signify (Euronext: LIGHT) entertainment lighting brand.

Celebrated production designer Sooner Routhier worked closely with the band and their management to design and build the show, collaborating with Alex Specht as Associate Lighting Designer/Lighting Director and André Petrus as Associate Production Designer/Lighting Programmer. Together, they created a design that would take the audience back to the early days of large arena rock productions, as the band played their new album in its entirety in Act II of the show. (Acts I and III saw the group treat fans to their biggest hits.)

“We resurrected pods of lights seen in vintage rock productions and added a scenic fascia to them and the risers, giving a nod to the music video for the album’s first single, also called Viva Las Vengeance,” says Routhier, who has won many awards for her work with a wide range of artists including Coldplay, The Weeknd and KISS. “During Act II of the show, we plunged the band into a vintage rabbit hole. We used vintage star filters on the IMAG screens and golden rain curtains flanking the screens to add the feel of a 60s televised game show.”

“We needed a lot of the same type of fixture for the pods, and I had demoed the VL2600s a couple weeks prior to the tour bid process and loved the idea of having a massive amount of them in the air. I also knew that Andre and Alex would program some incredible looks with that number of powerful profiles. The VL2600s are perfect. There are tons of features making cuing and effects diverse. They were able to make the lights look like washes for some cues and huge gobo looks for others.”

The VL2600 PROFILE luminaires were rigged in eight pods flown above stage left and stage right, in view of the audience and rigged to showcase Routhier’s inspired design.

Alex Specht has worked as Panic! at the Disco’s lighting designer since 2014 and collaborated with Routhier to maximize what the VL2600 fixtures could offer. “The LED engine was one of the main things that made the VL2600s right for this project,” says Specht. “I’m most impressed with the zoom and iris ranges, which helped separate the looks of each act. The VL2600s helped us create sharp beams and aerial gobo scenes for Acts I and III in the show, and a wider ‘par can’ feel for Act II. I feel we found a balance of light, video and negative space, with each feature showcased well when the time comes to shine. The VL2600s played their parts spot on.”

Programmer André Petrus is controlling both the lighting and the video aspects of the show. “Vari-Lite has always used high quality glass and it shows,” he says. “The rich color of this LED profile was in my opinion the most impressive feature. And when it comes to brightness, we spent a good amount of time balancing this with the video. Just because the light can go to 100, doesn’t mean you have to take it there. The VL2600s still cut through even at high trim.”

The VL2600 luminaires were supplied to the Viva Las Vengeance arena tour by PRG, with Anthony “Looch” Ciampa as account representative. Panic! at the Disco play dates throughout North America this fall before taking the tour to Europe in the spring, ending with a finale at Manchester’s AO Arena in March 2023.

Image Caption: The team utilized the VL2600 luminaires to create a wealth of effects, including washes for some cues and huge gobo looks for others. Image credit: © Todd Moffses.