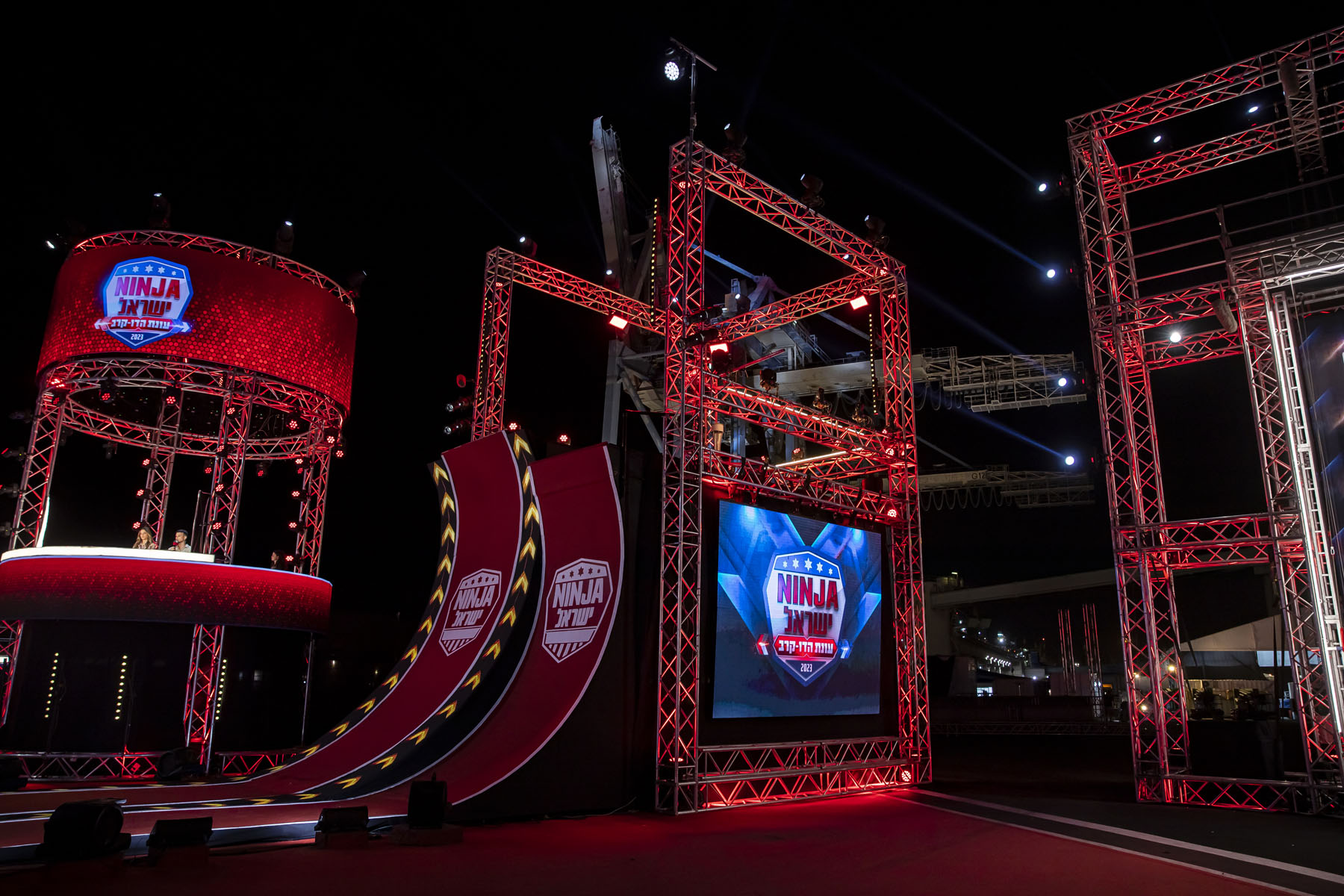 All the action – as competitors negotiated a series of increasingly difficult obstacles against each other and the clock – was filmed overnight due to the extreme heat, and expertly lit by lighting designer/director Ofer Jacobi working in close collaboration with director Oren Levi.

Fourteen substantial constructions/games were designed and built by the Ninja Warriors international team ATS. The concept originally started as a Japanese video game in 1994 then became a popular reality TV show Sasuke, which was the inspiration for the first US American Ninja Warrior (ANW) in 2009, with the UK version starting in 2015. It is now a worldwide phenomenon!

The games/obstacles, which consume several kilometres of trussing, change each season, with one constant factor across the whole Ninja Warrior franchise and that is Mount Midoriyama, a punishing final challenge that contestants must conquer to win the large cash prizes and the ultimate title of Ninja Warrior!

Ofer chose all these Robe fixtures for their power, functionality, and reliability. 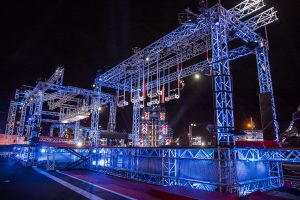 These factors are “key considerations” for a job like this which entails an exterior environment with high humidity and heavy usage. Apart from that, naturally, “they all look great on camera,” he stated.

Whilst obviously a TV show, this site requires a stadium lighting approach in so many ways to capture the scale, complexity, and rawness at the essence of all that adrenalized excitement!

Ofer also likes Robe as a brand, so there are usually some Robe products in most of his television work which also includes Who Wants to Be a Millionaire, Master Chef, Hamerdaf (The Chase), The Next Restaurant.

Two of the BMFL Blades were positioned on the floor either side of the landmark Midoriyama Mountain and were used for following the action, with the other 12 on a circular central stage in the middle of all the games which had a video floor. From there, the BMFL Blades could beam around, searchlight style, and pick up contestants on all the surrounding games.

The Spiiders were dotted all over the site, rigged on various trusses and used for general washing and TV lighting. The entire central area could be illuminated with spiders – they produced a rich and colourful light carpet which looked amazing on the overhead drone shots – and they were rigged in positions where they could quickly swap between the different games’ sets, effectively replacing the need for substantial numbers of static Lekos and LED panels.

Ofer likes the Spiider’s colour mixing and range of colours which include CT whites, although they were mainly used in the show’s signature electric blue. Some lighting cues were co-ordinated with the games action as everything flipped red when a contestant crashed out or hit the water pools underneath the games!

“The Spiiders were a fantastic and a highly flexible option for these tasks and for this show,” he noted.

The Pointes were distributed around the set and the various games. “The beams look great and very dynamic on TV” said Ofer, and they were also ideal for creating big victorious looks for the winners.

The LEDBeam 150s were deployed in two vertical lines ascending the mountain and used for making geometric beams in the air and filling the arena with effects as well as augmenting the Pointe beams in some looks.

Having all these Robes at his disposal gave Ofer “multiple options” to achieve the drama they wanted and follow the action, ensuring that all 29 cameras could get fantastic shots.

He worked closely with his regular programmer Ronen Ben Harosh who operated the two Compulite Vector consoles (one for effects lighting and one for ‘conventional’ TV lighting) running a total of 24 x DMX universes of control. Before getting to site, the pair worked through everything in WYSIWYG which give them the optimal lighting positions so they and the riggers could spend their time efficiently.

The lighting challenge – as always – was to make the action thrilling for TV audiences while lighting for a demanding multicamera environment. The exacting nature of the project and the tough scheduling are what Ofer thrives on, enjoying creating new ambiences and vibes every time.

The crew were on site for 3 weeks including the build and rehearsals, followed by 8 nights of overnight shooting with a crew recovery / sleep day in between each recording session.

The production company was Keshet, and the show will be broadcast on their Keshet12 channel.