Boyband Tour Kicks off with Robe

The Boyband Tour is a vibrant, joyous, hi-energy, two-hour steamroller of a set inspired by some of the greatest international ‘boyband’ hits from the nineties and noughties – Westlife, Backstreet Boys, SpiceBoys (celebrating the wonderful androgyny of music) and many more infections and beats that defined much of the pop of the era! It is delivered by five talented Danish musical stars – Silas Holst, Kim Ace Scherlund, Teit Samsø, Jeff Ace Scherlund and Joakim Traneberg – who are also the show’s producers.

Lighting, visuals, staging, and technical production is right at the heart of this project, which is the brainchild of Silas Holst, so Sune Verdier was delighted to be asked onboard to co-ordinate these aspects and also to production manager the first leg of The Boyband Tour which kicked off in Aarhus in December 2022 and continues around Denmark through February 2023.

Sune specified some of his favourite Robe moving lights for the eye-popping show with ESPRITES, LEDBeam 150s, MegaPointes and Pointes plus other lighting and LED fixtures all supplied by Copenhagen based rental company, European Touring Productions (ETP) along with the audio and LED screen.

Integral to Sune’s show design is the video content that is diligently crafted into the show which he commissioned from media specialist Faceoff Media House, which also produced coherent graphics, imagery, logos and promotional and marketing packages and content for the whole Boyband tour concept.

Video and lighting cues work in complete harmony with the slick choreography (directed by Kim Ace) to help produce the pulsing, foot-tapping, up-beat performance that fires up everyone in the room with iconic hits that defined that specific epoch of pop culture

For Sune, The Boyband Tour project started a couple of years earlier.

During Covid, Joakim was appearing on a talk show and three of the five guys performed a special version of “I Want it That Way” by the Backstreet Boys. When a post of this went viral on socials, they reckoned they were onto something!

As their collective idea driven by Silas developed, Sune, who knew Kim and Jeff (the live show’s creative director) from lighting other musical theatre shows, was asked to design lighting and visuals. As the tour dates finally approached, he also took on the technical production management including sourcing kit, rental companies, crew, trucking, etc.

This relatively long gestation period – thanks to Covid interruptions – allowed the artists to really refine the show they wanted to create. They established a set list, and from that Sune discussed potential video content and the gags that would work well onstage to keep the pace pumping and the visuality fresh and invigorating.

“There was plenty of scope,” he commented, “Together, we – the artists and myself – devised a storyboard, which I then translated into practical and deliverable video content, and this was produced by the Faceoff team led by Mathias Berthelsen.”

Sune established the position of the 12-metre wide by 2-metre-deep screen, upstage of and above a raised catwalk with stair access at each end and a set of toaster lifts at the back – without which no self-respecting boyband set would be complete!

The screen is a great vehicle for narrative information – from pastiche music videos to song lyrics to stylised graphics – as well as for effects, some synched perfectly with the music and lyrics.

For “Dirty Pop”, the first number, a music video is projected onto the front as the guys periodically burst through the screen onto the forestage in sync with the video images – and back again through the screen. Kim developed this specific gag; it is highly effective and further notches up the excitement levels!

When it came to choosing lighting fixtures, Sune already knew he needed bright multipurpose luminaires and that the lighting would really have to pop to maintain the flow and speed of the show. It also had to fit the budget and into two trucks including the PA and video elements and furthermore, the design / rig had to be managed by a crew of three.

To capture the pop aesthetic, there is a lot of back, side, top and bottom lighting and around the screen. The three side booms a side are all on wheels and movable for easy re-scaling in different sized venues.

Kicking in from the upstage corners are two – left and right – matrixes each comprising 12 Robe LEDBeam 150s, chosen for their small size and high impact. They also re-emphasise the widescreen look.

At the top of the side booms and above the screen is a row of 11 x MegaPointes, which are are used for all the big WOW moments and massive beam looks, as well as for silhouetting and framing the five artists from behind and above. 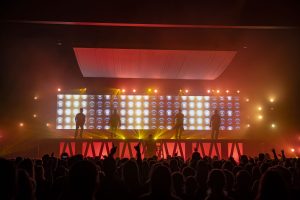 Below the screen, peeping through across the top of the raised catwalk are 10 x Robe Pointes, making a perfect complement to the MegaPointes higher up.

For front lighting, the keys and specials on the front truss are 7 x ESPRITES, chosen for their great output, high CRI and excellent quality of light.

In addition to these, there are some other moving head spot lights on the rig plus substantial LED lighting inside the set including 11 well-worked strobes. These and serious amounts of haze have all been programmed by Sune onto a grandMA3.

Sune often specs Robe products for his lighting designs and rates the brand highly for all the key factors, “Quality, creative options, reliability and great ranges for different applications,” he stated. He also appreciates the continuity between all the different Robe ranges in colours and other parameters.

“All those fixture types are perfect for this production – I know exactly what I can get out of them which really sped up the programming, especially when I ended up with a lot less time than originally planned!”

It is not a huge rig, but everything on it had to work extremely hard to get the sheer variety of looks needed to propel the show over two hours and 1500 cues, still keep it looking fresh and presenting visual surprises in the last song!

Sune had initially scheduled three weeks of basic pre-viz programming for himself prior to a three-week tech period in the Burning Snail Studio in Odder, just outside Aarhus. However, for multiple reasons, this boiled down to just two very intensive days of pre-viz!

When the Boyband Tour idea first started germinating, he undertook extensive research into the period, looking at footage and photos of the various featured artists and their shows at the time, many of them ground-breaking. “The lighting trends and the technology were very different then,” he commented, adding that – obviously – while he personally would have lit all of them differently in style, he also wanted to incorporate a period feel related to their glory days into the Boyband show … with his own adaptations.

All of them clearly had great fun doing this! For example, The Boyband Tour take of the classic Backstreet Boys ‘I Want It That Way’ airport video was filmed in the Værløse Aviation History Hangar at Værløse Airport, making a very effective pastiche.

The costumes were carefully replicated from the relevant years of the featured boyband’s own tours and hits, and the Spice Girls medley transformed effortlessly into the SpiceBoys complete with lycra-tastic outfits and crazy platform shoes.

A series of hilarious ‘backstage’ VT-play-ins on screen delineate the different sections of the show as the performers do their quick-changes and morph into the next artists.

All of this was developed working closely with the five artists, and Sune notes that it was a “different but very productive” way to work so collaboratively with the cast.

They are all musical theatre professionals, so there was plenty of mutual respect for one another’s spaces and input, “It was a fantastic experience evolving a show in this way,” he concluded.

Video content is stored on a disguise server and triggered via the grandMA3. As a timecoded performance synched to the backing track, the entire show is run by FOH sound engineer Jonas Jørgensen.

The Boyband Tour is performing 26 concerts n 20 venues in Denmark until mid-February and has had rave reviews everywhere. Many of them noting and complimenting the lighting and visuals – a feat almost unheard of in the mainstream media, one calling Sune’s design “exuberant and worthy of any international pop act”.

Judging by these and the live audience reactions, we will probably be hearing a lot more about it in the future … and Westlife might need to up their game!!!