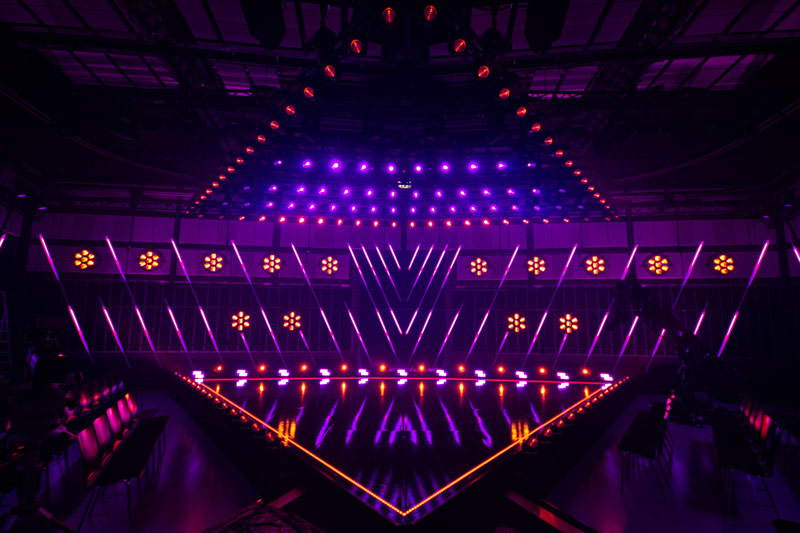 LD Raphael Grebenstein turns to more than 120 of the compact, lightweight impression FR1.

Light Art Studios GmbH from Hamburg was charged with the lighting design for this music show, with Raphael Grebenstein acting as lighting designer and DoP. In order to be able to deliver a varied show – with 19 different performances in the comparatively small studio – he opted for 128 GLP impression FR1 and 10 JDC1, among other items.

He explains: “As a music show, the format required a stage with a large proportion of show lighting in order to present an ever-changing stage with different looks for 19 songs. Studio 3 is actually not designed for this type of production. Its conical shape goes from six metres wide to 20 metres wide. Set designer Isabella Reicheneder skilfully took up this challenge by designing both the show stage and the opposite talk stage in a triangular shape.”

The compact impression FR1 primarily served to trace and emphasise the shape of the stage in the rig. In addition, the fixtures were also integrated on the bottom of the legs of the triangles to further emphasise the edge.

“When selecting the main effect lighting, it was important to me to be able to install a large number in order to make the relatively small studio look bigger in the camera,” Grebenstein continues. “At the same time, the ceiling height and the maximum ceiling load of 100 kg per metre were issues that presented us with challenges. The impression FR1, weighing just 4 kg, was simply the perfect lamp for this. Used as an effect light, it makes a very nice wash beam, aided by with the colour mixture and a very fast zoom.”

However, it wasn’t on this project that Grebenstein first came to appreciate the impression FR1: “I really liked the FR1 right from the start. Thanks to its extremely compact design, it can be used to great effect on small stages. But even on large stages, it asserts itself well if it is placed correctly and can supplement those places that large lamps cannot reach. In addition, I find the optics of the lens really pretty with single-beam effects. Thanks to the Fresnel lens, the FR1 looks very homogeneous as a single beam.”

JDC1 for wash, strobe and high-key looks
The JDC1s, on the other hand, framed the set at the back of the stage, both in their function as washlights and strobe lights and for occasional high-key effects.

“The JDC1 is a workhorse as both a wash light and a strobe/blinder,” continues the designer. “It has a very modern look thanks to the LED surfaces, and due to its size it fits in everywhere. It can therefore be used well on both small and large stages.”

In conclusion, he says: “The cooperation with all stakeholders and the ORF was very harmonious. The creative process, especially the collaboration with Isabella Reicheneder, was also constructive and extremely amicable. Together we managed to get the maximum out of the studio and to create a real custom work for the room and this application … largely due to the GLP impression FR1.”

Raphael Grebenstein was supported on site by show light operator Tobias Reinartz, white light operator Dominik Döhler, and Gaffer and project manager light/rigging Johannes Laugwitz, who according to Raphael “did a fantastic job”.